Drainage stone is supposed to drain. After all, typical 3/4″ to 1.5″ gravel used in septic trenches has a lot of void space. In my early days working at an engineering firm with a materials testing lab, I tested some typical, but fairly dirty, septic gravel and it had approximately 40% open space. So water should flow easily through that, right?

As part of our SepticSitterTM field validation program, we have been monitoring trench ponding levels in several leachfields located in PEI, Canada. We have observed some interesting results.

Mr. & Mrs. Buns (the name is made up but the system and data is real) have a 15 year old raised-bed, “Contour” drainfield. Contour drainfields were developed and popularized in Nova Scotia, Canada, and consist of a single (usually gravel) trench, with a level bottom, constructed to follow a natural contour of the land (across the slope). The trench for this three-bedroom home is 138 ft long by 4.5 feet wide. Mr. & Mrs. Buns are the only two occupants in the home now. It would have been loaded more heavily for several years after this system was first constructed when their children were also living at home.

The trench is gravity trickle-fed at the midpoint with a Tee which attempts to cause the flow to split evenly in each direction. This often doesn’t happen in reality as most of the flow tends to go in one direction or the other.

In 2015 we retrofitted inspection ports and installed SepticSitterTM sensors at three locations in the trench. The inspection ports extend down to the bottom of the gravel and permit monitoring of effluent ponding levels. We also installed a sensor in the septic tank.

As the data from the drainfield sensors show, the effluent distribution is not very even at all. 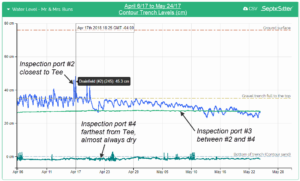 During times of high flow, rainfall events or snowmelt, the middle of the trench (inspection port #2) ponds to the top of the gravel or even higher (see the blue line on the graph). Otherwise, ponding levels fluctuate between 20cm to 35cm (8″ to 14″). At the location of sensor #3 (light green line on graph) the trench is typically ponded about 25cm (10″) deep with very little variation. But near the end of the trench, at location #4 (dark green line on graph), the trench is almost always empty.

So why is this happening? The septic tank has had an effluent filter on it since the system was first installed, so I don’t believe that a lot of solids could have escaped from the tank and clogged the pipe or drainfield.

The stone used in this system was quite “dirty” and contained a lot of fines (sand, silt, clay). If you saw it however, I doubt you would think it was dirty enough to prevent water from flowing freely through it.

However, perhaps over the years, biofilm developed in between the gravel particles, so that it started to bridge the void spaces between the stones. Could biofilm have developed to the point where it has started to interfere with the free movement of effluent throughout the trench? That is my current theory, however I would be interested to hear what you think.

How would you investigate or remediate this system? In your experience, do you believe the gravel trench can be restored to a “free-draining” condition with more equal ponding levels throughout? Tell us your thoughts in the comments below!

Dynamic Monitors is launching the SepticSitter system this week at the WWETT show. Come by Booth 4312 and see a live feed of the data from this site. You can tell me in person what you think is going on with this system.

Come see us at the NOWRA Convention and Exhibition in Nashville!